Westworld was really just a giant object lesson about proper backup and recovery design. The producers of the show may have felt differently; they seemed to think the show was more about free will or something. I will just say that if the creators behind Westworld (the park) followed proper backup and recovery design, the end of season two would have been very different.

I’m writing this blog post immediately after re-watching season two of Westworld in preparation for season three coming out next week. I’m going to be revealing major plot points of season two in this blog post.  You have been warned.

My tongue will definitely be planted firmly in my cheek for some of this post, but there are actually some really important lessons to be learned from what happens in season two of Westworld.

Solid-state storage apparently gets much better in the future. No more SSDs or SD cards. Everything will be stored inside a round sphere with no port or obvious electrical connection points like you see with an SD card. Instead, data-transfer appears to happen wirelessly in the same way that we charge wirelessly today. So we’ve got that to look forward to.

We already have water-cooled computers and racks, so this isn’t too far-fetched of an idea. Water cooling can be quite effective as long as it is properly managed, of course. But I don’t think water cooling will take the form that it does in Westworld. Loose water still does quite a bit of damage, as does condensation in a data center – something else that they make sure to display in the show. It looks cool, but that’s about it. 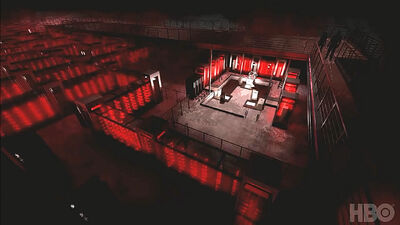 The number one threat to the two data centers in the show (besides poor design) is the hosts themselves. An android driving by AI runs amok and believes that the backups are actually what’s holding them back, because the park operators use backups to restore the hosts when they become damaged, which is what allows the guests to damage them with impunity. Dolores has a point, to be sure. From the perspective of the hosts, these backups are indeed the chain that keeps them enslaved. If there were no backups, the park operators wouldn’t be so quick to blow away their hosts just for fun.

The data protection lesson here is to never forget the danger of an insider threat. Many, if not most, of data center attacks have come from people inside the company. A disgruntled employee wants to harm the company that just fired them. Another employee feels that they are not properly compensated and chooses to solve that by letting ransomware loose in a data center. Make sure to protect against insider threats in your data protection system.

In addition to destroying data, Dolores also escapes the park with a bunch of IP as well. She steals her own copy, as well as what appears to be about five pearls containing copies of other hosts. This is very different from insiders seeking to damage data or encrypt data. This risk is someone (internal or not) stealing your company’s intellectual property. The modern equivalent to what happened in the show is someone creating a copy of important data and then walking out of the company with it. This is another risk that you really need to look into, and it is what data loss prevention software is all about.

Those familiar with my podcast will not be surprised to hear me mention the 3-2-1 rule. The designers of Westworld (the park) ignored almost every single aspect of this rule. They did not have different versions of the hosts over time; they only have the most recent copy of each host’s image. This is because they didn’t want the host to accidentally remember previous things. They also did not adhere to the “2”  because they really only had one copy, and it was stored in one data center. (Okay, perhaps there were multiple copies within that data center but I don’t think so.) They definitely did not have one of the copies off-site, because if they did the season would’ve had a very different ending.

Hale: One of the hosts just blew up our data center.
Bernard: I’ll get the off-site backups
Hale: This is going to be expensive. Good thing we’re making billions of dollars from all these rich people paying $40,000 a day to come to our park.

There was one scene towards the end of season two that really made me laugh. They first acknowledged that many customers had been killed by their product. Then they said that the much bigger PR problem was going to be when people figure out that they’ve been secretly recording everyone’s activities without their consent or knowledge.

Your product went berserk and killed everyone currently using it, and you think nonconsensual recording of personal data is going to be the bigger PR problem? Boy, the show producers really believe in the privacy of personal data, don’t they? So do I, and I don’t want to minimize how horrible it was that they were secretly recording everyone’s behaviors. I just think that once a product is shown to have killed everyone that used it, I don’t think anyone else is going to use the product ever again. But it is interesting that this very modern problem at the center of GDPR, CCPA, and other nascent regulations worked its way into the show.

I’ll just say that I’m a big fan of the show and I’m looking forward to seeing what happens in season three. Now that we realized the man in black is also an android (you did see the scene at the end of the credits, right), how does that change the storyline? (Of course, the men in black is actually an homage to the original man in black played by Yule Brenner, who was also an android.) Since Dolores is Dolores again, whose brain is in Hale’s body? Since they can faithfully reproduce whatever host they want, but other hosts what we see return? What happens to the park now? I’m just full of questions.

Written by W. Curtis Preston (@wcpreston). For those of you unfamiliar with my work, I've specialized in backup & recovery since 1993. I've written the O'Reilly books on backup and have worked with a number of native and commercial tools. I am now Chief Technical Evangelist at Druva, the leading provider of cloud-based data protection and data management tools for endpoints, infrastructure, and cloud applications. These posts reflect my own opinion and are not necessarily the opinion of my employer.

Is your data safe with cheap “prosumer” backup services?

Why it’s really hard to rig a national election

What it takes to make a successful SaaS product

Salesforce no longer has your back (up)

Coronavirus/COVID-19 coverage on the Restore it All Podcast

Do you like my blog or my podcast?  Subscribe to my email newsletter and I’ll email you whenever I publish a new one.